[Book Review] “Between You and Me” by Mary Norris

Home » [Book Review] “Between You and Me” by Mary Norris

“The dictionary is a wonderful thing, but you can’t let it push you around.” (Mary Norris, a.k.a. Comma Queen) 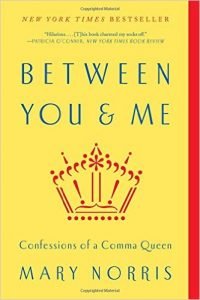 Mary Norris has worked as a copy editor for The New Yorker (TNY) for over three decades. She has copyedited the work of Philip Roth, George Saunders, Ian Frazier and many others. In this book, published in 2015 by Norton, Ms. Norris lets us take a peek backstage at The New Yorker, the magazine known for its strict (almost obsessive) style guide  and perfectionism, two traits that are very much appreciated by language purists.

But if you think this is another one in a long series of books lamenting the incorrect use of grammar by today’s youth, you’re going to be surprised.

Grammar is, of course, the main topic of the book: Ms. Norris write about how to deal with dangling participles, the difference “who” vs. “whom,” when to use “that” vs. “which,” compound words, gender-neutral language. She offers examples not only from classic authors like Charles Dickens, Emily Dickinson, Henry James, but also from David Foster Wallace and The Simpsons (and many others). You’ll also discover more about Noah Webster’s groundbreaking Blue-Back Speller (i.e. the method developed by Noah Webster for teaching spelling and writing); you’ll find out who is responsible for the hyphen in Moby-Dick (spoiler: It wasn’t Melville, although he also enjoyed a good hyphen now and then); and, you’ll most probably develop a passion for Palomino Blackwing pencils. (Trust me, it happened to me, too.)

The videos about grammatical issues – published regularly on the TNY website – will give you an idea of what the book is all about. They are, at least for me, a joy to watch. In them, Ms. Norris appears to be charming, funny, down-to-earth, and everything but a grammar nazi.

This first impression was confirmed during the reading organized on October 26, 2016, by Boekhandel Atheneum in Amsterdam. In a little more than an hour, with modesty and a lot of self-irony Ms. Norris told the audience about how she became a copy editor at the magazine; her struggle to become a published writer; her friendship with John McPhee, the lovely comment she received from Philip Roth after she edited one of his pieces (“Who is this woman? And will she come live with me?”), and what is was like to work for the legendary William Shawn, who was the TNY editor from 1952 to 1987.

“Between You and Me” tells of Ms. Norris’s passion for clear language and her dedication to a profession that very probably will disappear. Because, nowadays, who needs a copy editor?

For your viewing & reading pleasure:

An evening at The Moth: Mary Norris

In Defense of “Nutty” Commas

My Life in Pencils