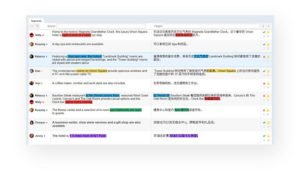 This article was originally published on the TAUS Blog, on December 17, 2014

One of the best sources of information about the Russian translation market has to be the website Translationrating.ru, that every year publishes a report on all translation-related issues in Russia  as well as a listing of the best performing Russian LSPs.

According to Konstantin Dranch, author of the website, translation agencies operating on the multiform Russian market compete for customers mainly in the financial, oil, metal and manufacturing fields as well as in the military equipment export sector.

Trados still holds the largest share of the market with approximately 70%, followed by Atril’s Deja Vu, MemSource and Kilgray’s memoQ. Dranch says that “the success of these translation tools is due to the fact that both sales and users support take place in Russian.” Dranch also underlines that “recently, the ruble has plummeted of approximately 40% against the euro and the dollar. This  means that any tool that is sold in euros or dollars is 40% more expensive for the Russian user.” With this in mind, we start to get acquainted with a new entry on the CAT tool market: the Russian SmartCAT.

Since 1989 – when it was founded – ABBYY has been releasing a number of software programs that make the lives of professional translators all over the world a bit easier. Just think of ABBYY’s Fine Reader OCR software and ABBYY’s Business Card Reader, or ABBYY’s PDF converter, PDF Transformer.

In 2011, the international company with Russian roots – that now has headquarters in the US (Milpitas), Western Europe (Munich), Eastern Europe (Kiev) and Russia (Moscow) as well as 14 offices around the world – started developing its own machine translation system, based on ABBYY Compreno technology, with the financial help of the Skolkovo Innovation Center. Anna Sidorova (Head of Marketing at ABBYY Language Services, the division of ABBYY Group) explains: “It’s a machine translation system based on the full syntactic and semantic analysis of a text, completely different from statistical machine translation, and currently it is available for English/Russian and vice versa.”

In 2011, always with funding from the Skolkovo Center, ABBYY started developing its own CAT tool, SmartCAT, with the goal of providing an integrated solution for the translation workflow, from project acquisition to translation over terminology management. Anna Sidorova comments: “Having completed over 150,000 various translation projects, we were able to gain an understanding of what translators need and the problems they encounter with different desktop applications. This is why we came up with the idea of developing our own CAT tool, which would be a cloud CAT tool and allow translators to work in teams simultaneously in real time.”

Alexander Muntyan (ABBYY LS technology analyst) guided me to the discovery of SmartCAT. Here are the highlights of this enlightening tour.

Although SmartCAT was developed primarily as a SaaS translation tools for the public cloud, it is also available as a corporate version that companies can either use from the cloud or install within their own infrastructure. Freelance translators have free access to the public cloud version and to all the basic functionalities. “Features like translation memory management, term base management, QA functionality, as well as a 100-page free package for machine translation and OCR — mainly PDF/image documents recognition — are all included and will remain free,” states Anna Sidorova. “ In the beginning of 2015 we will also give translators the chance to share their translation projects with colleagues within SmartCAT, in real time”. Right now the collaborative work is provided only for the corporate scenario.

In addition to these basic translation functionalities, the corporate version contains everything a language service provider needs for an efficient translation workflow management.

In a modern world with high speed of information exchange the question of data storage geography is also of particular interest. “We do aim to make our CAT tool truly international, that is why in the beginning we had to roll out our servers both in Europe and the US, so that users can choose when registering in SmartCAT”

It was a collaborative effort from the very beginning. As Sidorova explains, “The development happened in collaboration with freelance translators and the corporate translation departments of more than 100 companies. We interviewed them and asked them to evaluate the software. At the moment of the launch we already had integrated the feedback from freelances who have been working with the beta version.”

ABBYY is counting on the cooperation with a user base of approximately 11,000 people worldwide (a number that is steadily growing). “As we are planning the roadmap based on the needs of freelance translators, we need to reach as many people as possible to improve this tool.”

During the tour, Alexandr Muntyan repeatedly pointed out that one of the main distinguishing elements of SmartCAT is the extensive terminology management module. This is a widely requested collaborative feature: the translation team can use the linguistic resources at the same time and all the glossaries and translation memories are upgraded simultaneously. In Muntyan’s words: “The editor doesn’t have to wait to start proofreading the translation.”

On the terminology side, SmartCAT also gives its users the chance to develop multilingual concept-oriented term bases (up to 30 languages, with more to follow) and to conduct morphological term searches with different word forms. For examples, if searching the Spanish term for “language” the user might get “lengua” as well as “idioma” as a result.

SmartCAT also allows the integration of various MT engines, starting with Google Translate, MS Bing and Yandex. According to Anna Sidorova, SmartCAT  “soon will be introducing a productivity matrix to help translators track their personal productivity when post editing the MT results.”

Working with PDF files is a very intriguing feature integrated in SmartCAT. Users do not have to waste their time any longer to convert PDF files into some editable  (often substandard) format. They can simply upload a PDF file or even a scanned document and start translating. This option is free up to 100 pages a month, both in the freelance and the corporate version.

Promises for the future

The roadmap for SmartCAT is as clear as ambitious. Like mentioned above, ABBYY is planning to add productivity metrics (such as real-time measurement of translation progress, speed and time for a single translator or the entire team), a functionality for scheduling translation projects (based on the volume of the project, translators’ productivity and current workload), a LQA module (to assess  the quality of human translation, with quality matrixes and reports) and a real-time preview of the document being translated.

The future might be tough for SmartCAT, as there are already other players on the market with similar products (just think of MemSource, XTM, Wordbee, and MateCat). With so many tools reshaping translation technology market, 2015 promises to be an interesting year. Let’s see what niche SmartCAT will be able to contribute to this fast-evolving market.