What is a translation company’s market value?

Home » What is a translation company’s market value? 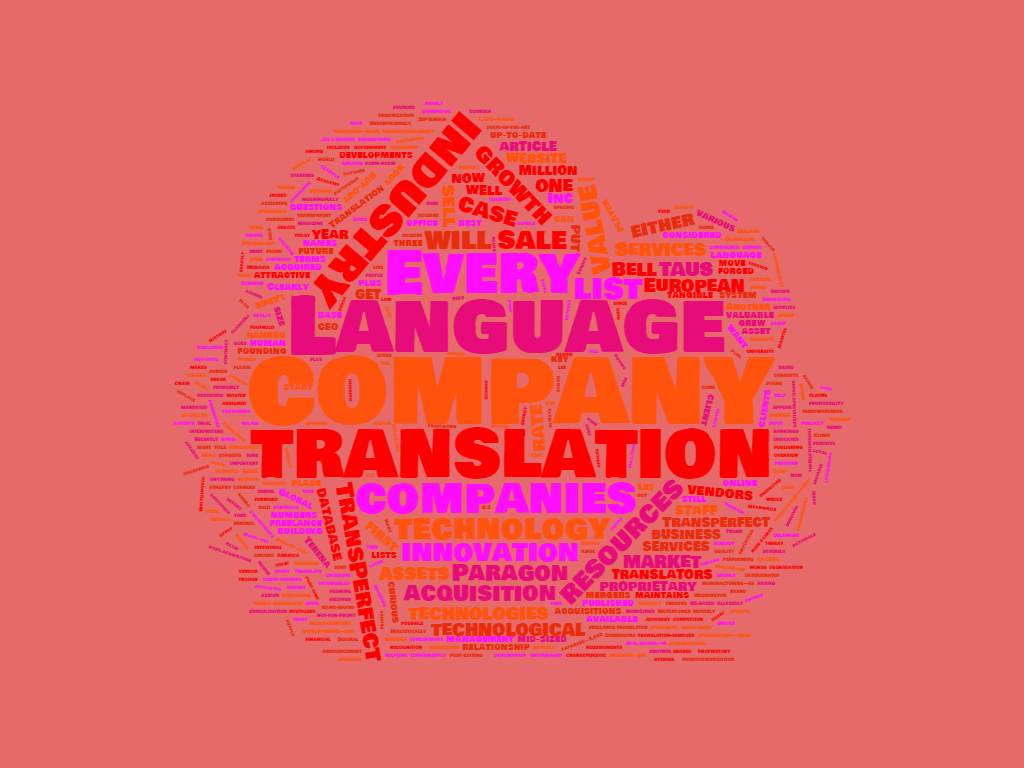 This article was originally published on the TAUS Blog.

Recently, one global player in translation bought out a competitor. Another key player was court-ordered to break up and sell their company. These business developments—and more—set me to thinking: What, exactly, does the buyer get when acquiring a translation company? What is the market value of a given translation company as a whole? And how does the market put a price on a company’s individual assets?

Let’s start with the case of the buy-out. In an article published in this year’s July/August issue of the journalMultilingual, Terena Bell, CEO and owner of the US-based company In Every Language, announced that Paragon Language Services had agreed to buy the company. Notably, the title of the article containing the news was “The translation company is dead”—but we’ll get to that later.

The amount of the sale to Paragon Language Services was not publicly disclosed. But, in one write-up about the sale, the value of In Every Language was described as “help[ing] clients move translation from a cost center to a profit driver”—quite an asset indeed.

Terena Bell founded In Every Language in 2005 and grew the company into a mid-sized language service provider. The organization sold language services to various industries—from healthcare to law and manufacturing—as well as to not-for-profit groups. Active in North America and Europe (primarily England, France and Switzerland), the company had a staff of three full-time and three part-time employees, plus 1,200 contract translators in the four corners of the world.

So, what did Paragon Language Services “get” with its acquisition of In Every Language?

For starters, we must acknowledge that In Every Language was a mid-sized company within our industry—but a micro-company in nearly every other industry.

Apart from the tangible assets (real-estate—in this case an office building in Washington D.C., equipment and office supplies), the bulk of the acquisition consists mainly of intangible assets:

Also notable is the rationale behind CEO Bell’s decision to put In Every Language up for sale in the first place. She writes in the Multilingual piece, “The effects of supply chain degradation, industry overdiversification, market consolidation and technological innovation mean that the translation company of the future will either sell over $10 million a year or it will sell under $1 million, but there will be no companies in between. Those that are in between right now will either be acquired to make another company bigger, like In Every Language was, or they will atrophy into highly-specialized boutiques.”

In other words, Bell claims, the translation industry’s future is about being either super-specialized or super-sized, with no room for anything in between.

(Translation trendwatchers take note: these were not this year’s only mergers, acquisitions, or buy-outs: theMultilingual website has an up-to-date list of business developments for the curious among us.)

Let’s move on to the case of the recent forced sale in our industry. Several weeks after the In Every Language announcement, the company TransPerfect was mandated to go on the market. After a six-day trial, a Delaware judge appointed a custodian to oversee the sale. (Reason: the so-called “dysfunctional” relationship between the company’s co-CEOs. Allegedly, the relationship had deteriorated so severely that it posed a threat to the survival of the company’s profitability and its staff.)

Now, we’ve all heard TransPerfect’s founding myth, how the company was created in 1992 out of a university dorm-room, and how it grew into one of the major translation companies. According to its website, TransPerfect today boasts revenues of over $470 million and maintains offices in 90 cities on five continents. TransPerfect employs 3,500 people and maintains a database of some 5,000 linguists. The company’s stated expansion strategy has always been transparent: Acquire companies that are specialized and that either own proprietary technologies or have a firm foothold in a specific country or region.

So, what would you be buying if you were to acquire Transperfect?

Once again, let’s put aside the tangible assets and concentrate on the intangibles. We can all agree that Transperfect has the requisite human resources and client portfolio. But the large size of the freelance-translator database—5,000 in contrast to In Every Language’s 1,200—raises questions about the value of the database; is it really possible to meaningfully qualify, rate, and monitor so many vendors?

In the case of Transperfect as a large translation company, technology does come into play. On its website, the company lists various proprietary technologies: a TMS (GlobalLink); a CMS; a localization-proxy technology; and WordLingo, a scantily used machine translation system. Realistically, this cannot be considered a state-of-the-art technology bundle.

A look at the numbers

Inc. magazine has published the 2015 list of the fastest growing companies. For the first time since Inc. has been publishing the list, we now have a European version.

A curious characteristic of this list: the names of translation companies appear in the context of other industries. For example, TransPerfect is ranked #4535 and defined as a company belonging to the “business products & services” sector. The same goes for Paragon Language Services, the company that acquired In Every Language (Paragon is ranked at #1777 and assigned a growth rate of 225%). Meanwhile, Global Dimensions (#191, growth rate of 2,161%) belongs to the government services industry, and the European Translate Plus Limited (#2,016 on the European list, growth rate of 328%) is considered an IT company.

Another curiosity: Lionbridge, Moravia, Smartling and SDL, all of which have considerable name-brand recognition and prestige, are not mentioned at all on the list.

Conveniently, an overview table with the names of the best- performing translation-services companies (based on the Inc. rankings) is available at “Global Watchtower,” Common Sense Advisory’s blog.

Since its founding in 2005, TAUS has actively encouraged tech innovation in the translation industry. And now, TAUS is pushing translation technology forward with even greater energy.

At the start of September, we opened the doors of TAUS Academy to bring you the best resources in translation automation. Some resources are already available online: the technologies and post-editors directories; articles, reports and webinars; the knowledge base; plus the online courses on post-editing and quality management. To develop other resources, we are eager to hear your suggestions.

We want to help you master current technologies. Anticipate industry developments. And create what your customers want.

So, if you found this article interesting and useful, please send us your input and be sure to fill out our survey.