The Arrival of the Linguistic Hero

Home » The Arrival of the Linguistic Hero 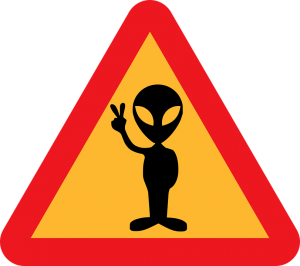 There is a wave of enthusiasm passing through the translators and linguists community: Hollywood has rediscovered the linguistic hero.

In the past, we’ve had My Fair Lady, Stargate, Windtalkers, the romantic Madly, Truly, Deeply, and I’m sure you can mention others.

In any case, the latest addition to the list  is Arrival and the linguistic hero in question is the fictional character of Dr. Louise Banks, a linguist recruited by the US military to assist in alien communications.

The aliens are called “heptapods” (basically gigantic squids with seven tentacles) and have landed on our planet in a dozen of extraterrestrial space crafts (creatively named “Shells” by the military officers in charge) touching ground in 12 countries (US, China and Russia, among others). They make difficult-to-decipher sounds and write using circular signs.

The best part of the movie is indeed the one about the alien writing system: When the heptapods write, they squirt ink in circular shapes with irregular edges (nodes). The irregular parts are the elements that convey the meaning. Each circle is a sentence and it also represents the way this alien species sees the world: time for them is non-linear. In translating the alien language with a powerful software – which must have been developed specifically on the spot for this out-of-the-ordinary situation, I presume – Louise identifies the meaning of various nodes. Engadget has more on this. 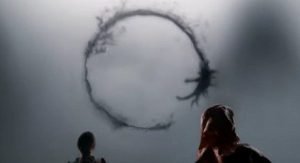 A fun moment – although rather unrealistic – is when an army colonel says to Louise: “You’re at the top of everyone’s list when it comes to translations.” Now, honestly, as a translator, when was the last time a client said that to you?

Unfortunately, there are evergreen clichés. For example, the stereotype that a linguist must be able to speak many languages, possibly all languages: When the movie starts, Louise is in a class teaching Portuguese, and in the course of the story we learn that she also speaks Farsi and Chinese, and has studied Sanskrit. To the director and the screenwriter, a linguist is also a translator. In reality, how many translators consider themselves linguists and vice versa? 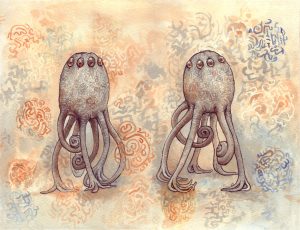 A couple of elements that bothered me were the fact that the spacecraft is clearly a residue from the Dawn of Men in “2001 Space Odyssey”, and the heptapodes, like all Hollywood alien species so far, are all kind of ugly looking – although highly intelligent. Not to mention the usual good guys/bad guys mentality pervading the plot from beginning to end.

Despite all this, the movie gives us linguists and translators a solid reason to gloat: Only a linguist/translator is capable of bringing peace on Earth and beyond.

There are already some articles and opinions about the movie available online. Lexicographer and language commentator Ben Zimmer writes about the movie in The Wall Street Journal and conducts a thorough analysis of the cinematic linguist’s office. Insider tells us about the 100-word vocabulary created specifically for the movie.

The McGill Alumni website features an interview with Jessica Coon, associate professor at the McGill’s Linguistic Department, who served as a consultant for the movie and who, during an interview with Wired, gave some tips on what to do when we find ourselves for the first time face to face with an alien species.

And finally, you might want to check out the Guardian review : “Why, you ask, did they not approach Noam Chomsky, with his understanding of “deep structure” in language?“. The answer, I think, is that an understanding of the deep structure of language doesn’t mean that you understand – let alone speak – all languages.

Now that the general public is discovering linguistics, it might be a good moment to mention three documentaries that can show how challenging and interesting this discipline can be. 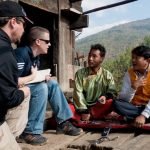 The Linguists – The language scholars Greg Anderson and David Harrison travel the world to find isolated civilisations and hear rare tongues. In Siberia, they record a language that will disappear in the next few decades; in India, they listen to Sora and learn how English colonists altered the nation’s culture; in Arizona, they document the Chemehuevi language of Native Americans. 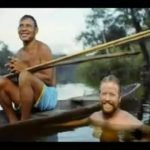 The Grammar of Happiness – Professor Daniel Everett lived for many years with the Amazonian Piraha tribe. His assignment was to translate the Bible into their language. His discoveries end up challenging the universal grammar theory  formulated by Chomsky. 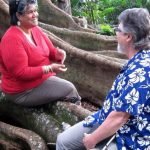 Language Matters – At the moment, over 6,000 languages are spoken around the world. In a few years, some hundreds of them will disappear. What happens when a language dies? How can we save endangered languages? Why should we care? The documentary takes us from Australia to Wales to Hawaii, in the effort to explain how language is intrinsically connected to our identity.

… and a book for aspiring linguistic heroes 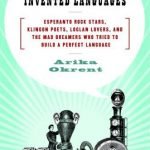 Finally, for those who are developing a taste for invented languages, In the Land of Invented Languages by Arita Okrent will tell you everything you want to know about Esperanto, Klingon, Blissymbolics and other less known constructed languages.